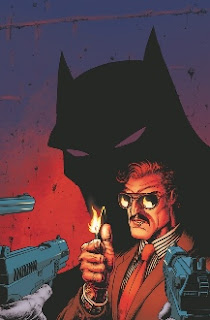 Man! I’m so happy that Grant Morrison gets to ignore the new 52 reboot. I’d heard this was the “new 52 introduction of Matches Malone” but it really isn’t. The old Matches stories still happened; this is just the next chapter in Morrison’s Batman epic. Heck, if it wasn’t clear enough in the dialogue, the enormous web of Leviathan’s operatives makes it clear this book is just continuing along as it always has. Yee-haw!

This thing is so full of ideas; new villains, the Bat Cow, new super-heroic IDs, wonderful guest stars, wonderful cameos. I mean, this book is packed with value for your $2.99. Lumina Lux certainly has the look and the name to be a recurring interest for Batman, so I’m hoping she can sit around. And is that El Gaucho doing a Bueno Excelente impression from Hitman?

And it wouldn’t be a Grant Morrison comic without some insane villains doing some crazy things. We’ve got the Hangman, Goatboy, and some Punch-like Judge showing up by the end; who knows what’s next? Morrison’s wonderful conspiracy at the open of the book is great too. Leviathan has infested Gotham!

Chris Burnham’s work is a revelation. His use of sound effects on panel (“Scram” and “Clang” come to mind) is so much fun, it’s Steranko-ish. And as for Redbird, the design is great; it’s not easy to make Damian look so young AND so dangerous, but Burnham does it perfectly.

If DC is curious why their Batman books sell so well, the answer is simple; it’s not because of a rebooted continuity, it’s because of fantastic creative teams.