I read the debates and the tirades. I read the arguments about “my” Superman vs. someone else’s. And I really think that I went in to see Man of Steel with an open mind. Well, if not an open mind, I was ready to accept the film for what it is; a re-imagining of Superman set up to compete against Christian Bale’s Batman. And if that was the goal, then I think Zack Snyder really did nail it.

For the first 15 minutes or so, I was enthralled. The scenes set on Krypton were a spectacle that more than delivered. I thrilled to the alien ships, sets, costumes, and fauna. From the animals to the insect-like spacecraft, I couldn’t get enough. I found myself stunned, thinking that DC’s Superman could launch a space opera like Star Wars if someone focused on material like this. I was so excited; I actually thought “Who couldn’t like a movie like this?”

Then things came to Earth. And Superman. He didn’t say anything for the first 40 minutes of the movie (or so) and after that, ol’ Supes barely added anything else. There wasn’t a whole lot to connect to with the dark-blue suited, cold, Superman. I blame his Dad. Kevin Costner as Pa Kent was one stern dude, and he sure gave Clark some daddy issues to carry around for the rest of his life. Pa took his lessons way too far, too.

Only in a few moments did Henry Cavill channel any of the likeable, relatable sincerity of previous cinematic Supermen. I liked the twirling landing with Lois Lane. The whole interrogation scene with the US Army was also charming. I could see Cavill’s charisma trying to break free from the dour, serious tone of the surrounding film. Nowhere was this more apparent than in the movie theater lobby. Two comic book posters sitting on the wall, right next to each other. Thor is grimacing, wielding his hammer, ready for a fight. Superman is staring pensively off into the middle distance, pondering heavy, emotional thoughts that weigh him down.

The supporting cast is great from start to finish. Amy Adams is a charming Lois Lane; it is hard not to root for her. Lawrence Fishburne felt natural as Perry White. The lack of Jimmy Olsen did bum me out; was he too “silly” to get put in this dramatic film? Russell Crowe had way more to do than I expected. And are you really dead if there is a computer program running around that is basically you?

Of course, Michael Shannon was a great Zod. He really seemed to live in that heavy Kryptonian battle armor. It looked great on him, and his square head looked like a natural helmet. I loved the way Shannon was all business until the end, when he stated the reason he was so dedicated to his cruel path.

And the fights! The super-hero battles looked great. The POV punches knocking people around town. Snyder’s use of snapping into and out of focus for faraway shots. The use of larger than life weapons. It was all visually stunning and entertaining, as I’d expect from Snyder.

But man, that’s not my Superman. My Superman wouldn’t START a fight by plowing his foes into his hometown, then proceed to wreck it. At the least he’d move the battle away from innocents. He wouldn’t destroy his last link to his birth world to send a more dramatic message to Zod. And he surely wouldn’t have allowed such a hugely destructive battle to literally level Metropolis. I understand a lot of that is inherent in the huge threat he faced, but man, the loss of life must be in the millions. That city was absolutely destroyed. And AFTER that, Superman started punching Zod through occupied buildings! That’s insane!

I actually don’t have a problem with Superman taking Zod out the way he did. Zod forced his hand, Zod wouldn’t quit, etc. BUT, I guess we’re supposed to just assume that Superman COULD taken that action at any time, but the people in those buildings weren’t as worth getting as riled up over as that family in the train station. I’m pretty sure a lot of kids died when their apartment buildings collapsed.

So, basically this is an entertaining but flawed film. As a super-hero movie, it actually holds up OK. Good villains, great special effects, nice fights. As a Superman movie, it doesn’t hit the mark for me. Superman doesn’t inspire, doesn’t engender any trust, and is pretty darn reckless. Heck, he’s actually selfish! He STEALS CLOTHES! My Superman would at least do some chores to pay the family back, right?

This is a modern Superman story. My problem is I don’t want Superman modernized. He should be better. But that won’t make Warner Bros. the money. I get it.

The Energy Analyzer says that anything that raises awareness of comics is at least somewhat GOOD.

The Laws of Comics: I. Every Comic Book Needs a Physical Confrontation

The Laws of Comics

With my almost 30 years of comics-reading experience, I have discovered that there are certain truths in comic books storytelling, and more importantly, in the enjoyment of comic books as entertainment. No doubt there are a few exceptions to these rules, but in nine times out of ten, these laws have proven to be true. Some of these are cause and effect relationships, some are merely rules that comics should follow. When these rules are followed and understood, all comics will be GOOD.

But either way, these laws provide insight into what all rational beings call “good comics.”

This is particularly a problem in modern comics. Too often dialogue-heavy writers will go entire issues and not include any sort of real fighting. Comics are a visual medium, so having the entire conflict in an issue be dramatic or cerebral is a mistake. I think this has come about from writers “writing for the trade” figuring they could pad out a monthly (or bi-weekly) storyline with a bunch of pages with characters feeling rather than doing.

Bendis, of course, has a habit of doing this, and I’m afraid the fact that his Avengers sold so well has led to Jonathan Hickman doing the same thing. The Ex Nihilo conflict in the current issues started off in with an intriguing confrontation, but now we are a dozen issues in without a follow up battle. I was in shock when a recent issue featured Thor and Hyperion sitting on a golden hillside discussing their feelings.

Grant Morrison started an odd habit during Final Crisis that he seemed to struggle with for a bit. In Final Crisis especially, he would set up a battle, then jump to the end of it. It makes no sense to rob the reader of the actual fight. This seemed to be a conscious choice, not a matter of writing for the trade. (Let’s not even get into Superman singing to save the universe. Songs don’t work so well in comics either.)

Comic book panels provide a freeze-frame view into what should be kinetic, bombastic action. I’m not debating the use of “BAM” or “KrakaDOOM,” I’m saying that comics should take advantage of the ability to blow a movie budget out of the water. Comic book pencillers are good at drawing emotions on characters faces, and comic book writers are the ones who make us care about the story with their words, so I’m not downplaying the writing. But each comic should show off the strength of the visual medium.

Characterization is tremendously important, of course, but for $3.99, a comic should be able to deliver both dialogue and a chance to see the character actually doing something. I also understand that by delaying the gratification of a battle, when the fight finally arrives, it really riles you up as a reader. But there has to be a way to balance that with getting some value for your money.

Robert Kirkman is a master at letting his characters banter and build up to big confrontations, but still delivering a climactic, cinematic moment that at least gives the illusion of accomplishment in every issue.

While we can all appreciate different types of comics, what brought most of us to the dance was seeing larger than life characters solve their problems by hitting each other. There absolutely should be more to a comic than mindless slapping (see most mid 90’s Image comics), but there is a place the escapism of comics. These characters do what we can’t; they solve their problems by punching them. A comic without that? Wake me up when it’s over. It is a lot easier to forgive a single issue lacking a fight in a trade paperback, after all, there is no doubt one in the next issue. But for $3.99, I want a fight every month.
Posted by Timbotron at 10:32 AM 1 comment:

Email ThisBlogThis!Share to TwitterShare to FacebookShare to Pinterest
Labels: Laws of Comics 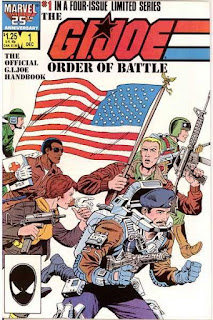 It has been three years since I last made it out to Charlotte’s Heroes Convention, so it is with great excitement that I’m packing up the ol’ bags and sketchbooks again this year. It does hurt to foot the bill on the plane ticket from Wisconsin, but I’ve been going to Heroes Con with the same crew since 2000, so tradition trumps thriftiness this year.

With sketch prices going through the roof, I don’t think I’ll be able to afford too many, but I am hoping for a few original sketches and pages. This year’s theme is G.I. Joe, so I’ve got the old Order of Battle sourcebooks all ready to go. If I can get Flint, Lady Jaye, Zartan, and maybe an obscure guy like Blowtorch or Tripwire, I’ll be a happy man.

As for pages, I’m really hoping I can afford a Black Panther or Captain America page from Francesco Francavilla and a G.I. Joe page from S.L. Gallant.

I should be at the con all three days, so if you see a chubby, goateed guy, say “hi,” that’s probably me. (Hmm, on second thought, that is every nerd at the show, isn’t it.) I probably will be the only guy there in a Brewer’s hat, though!

Conventions almost always prove to the Energy Analyzer that comics are GOOD!

Posted by Timbotron at 7:19 AM No comments: