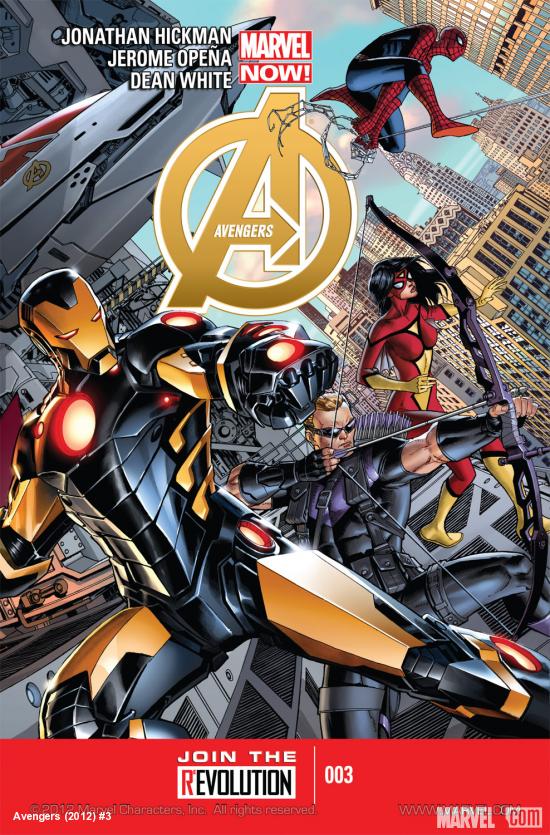 Ah, here comes the action! I’ve read enough of Jonathan Hickman’s work to realize he works better in trade than in floppy, and that seems to be holding true here, also. The last issue was a tad slight on combat, but Hickman more than makes up for it here.
Cap comes back with the Avengers army to take on the cosmic baddies threatening the Earth. Those villains may have cleaned up against the core team, but when Falcon, Shang Chi, and Captain Universe come calling, things go down quite differently.

This book has a big cast, so I appreciate how Hickman takes the time to introduce the main players through the dialogue. Some folks like Cannonball, Sunspot, and Shang Chi get shortchanged on intros, but they get their moments. Sunspot is still a flirt, and Shang Chi kicks so much butt, I can’t believe he’s never been an Avenger.

The new guys get some spotlight too. Hyperion takes on the Hulk and more than holds his own. I’m totally confused on which Hyperion this is, of course, but I assume that will be handled. The new Smasher is also very helpful in laying out her backstory through her confident battlefield chatter.
I will say that this lineup is so huge, that it is a good thing the book is scheduled to come out quicker than normal. There are simply too many people on the team for everyone to have a chance to shine.

Captain Universe (too bad it isn’t Monica Rambea like people hoped!) saves the day, and many of the Avengers help. But folks like Spider-Woman, Hawkeye, Black Widow, and more don’t really have a lot to do. Splitting the team should help with that.

Jerome Opena gets to do some costume redesign in this first arc. Falcon’s new suit is a nice mix of modern and classic. He’s clearly recognizable, but in a cutting edge suit. I like Opena’s take on Captain Marvel, too, Carol Danvers’ current look is hard to pull off, but Opena seems to have it. Manifold’s glowing costume is really neat, and I like Shang Chi’s new duds too.

I’m less impressed with the generic suits Cannonball and Sunspot are sporting. I THINK the intent is to harken back to the original New Mutant costumes of simple yellow and black, but the matching, simple look seems out of place on the Avengers. 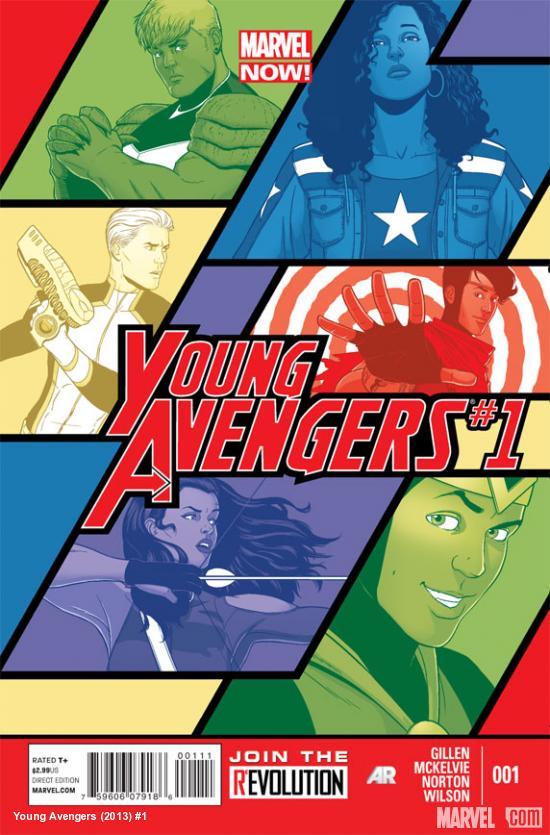 Thank goodness I bought a hard copy of this comic and didn’t buy it digitally. Jamie McKelvie’s art is a major draw for this book. He draws young, beautiful people doing amazing things. Seriously, half the cast spends time with their shirts off, in tank tops, or short-shorts. But you can’t label it as an eye-candy book, because McKelvie nails the action too. The whole Spider-Man sequence is a delight, with Hulkling doing a lot to move up my ranks of favorite characters (and I’m not partial to shape-shifters).

The most striking visual aspect of the book is the action splash page. A few times during the issue, McKelvie lays out a double page spread of action, broken up by iconic phrases to give us a great read on the characters involved. Was that McKelvie’s idea or writer Kieron Gillen’s I’m not sure, but it works beautifully. I just worry that effect will be greatly weakened reading the title digitally.

Kieron Gillen is rapidly becoming a favorite for me. This is a teenage drama book, and he writes it like one. The trappings of super-heroics are certainly here, but the focus of this book seems to be on relationships. The young love and family drama of Wickan and Hulkling seems to be driving the plot more than anything else. I will say, it does weird me out. Should a man in his –ahem- late 30’s be reading about teenagers?

I’m thrilled about most of the lineup for the book too. While Kate Bishop doesn’t get to do too much, we know the character from elsewhere, I’m sure Hawkeye will be in good hands. Kid Loki is still a new idea for me, but seeing him interact with the new Miss America has me ready to go seek out his older appearances. And Miss America Chavez. She was the break out character of Vengeance, and I can only hope she continues her rise here. She’s got a wonderful look and fun personality. She needs to keep getting this exposure.

Email ThisBlogThis!Share to TwitterShare to FacebookShare to Pinterest
Labels: Avengers 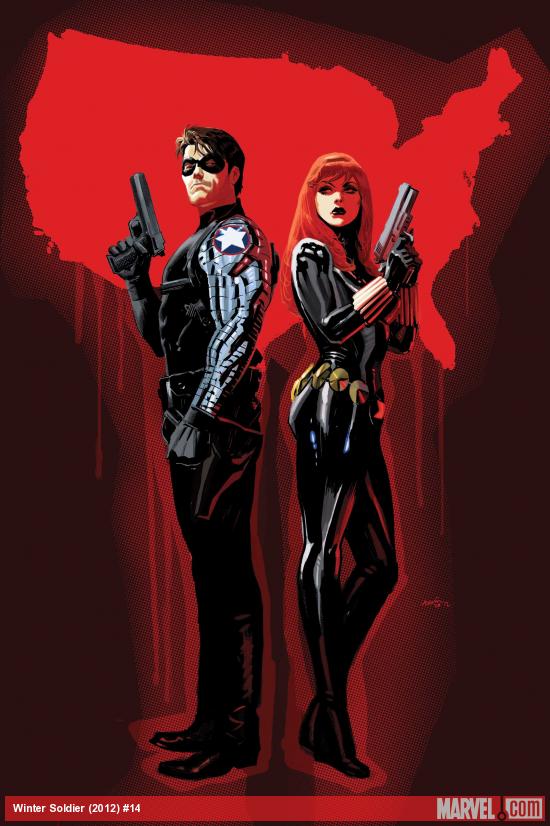 Brubaker dodges one of the common complaints in comics writing, he doesn’t leave everything nice and neat for the next creative team. Too often the status quo is restored in time for the new creators to come in and put their stamp on a character. And while Black Widow is back to her normal self, and Winter Soldier is plain ol’ Bucky Barnes again, it’s not the same between them. I won’t give it away, because that is the whole tragedy of the book, but it sure seems like Mary Jane Watson and Bucky have something in common now.

The final confrontation feels a tad rushed; the fight probably could have used a bit more time to breathe. Hawkeye shows up to play a pretty important role, but he just sort of shows up to give Bucky a hand. I would have liked Leo to get some butt-whipping in on Hawk, Wolvie, and Cap; that would have shown how tough it was for Bucky to get his win.

Butch Guice’s art has an unusual look to it. I got an almost Dale Eaglesham-ish vibe from a couple characters. Maybe it’s the inker, but this doesn’t look quite like Guice’s other work. I do like that he uses so many shadowed figures and silhouettes in a spy title. 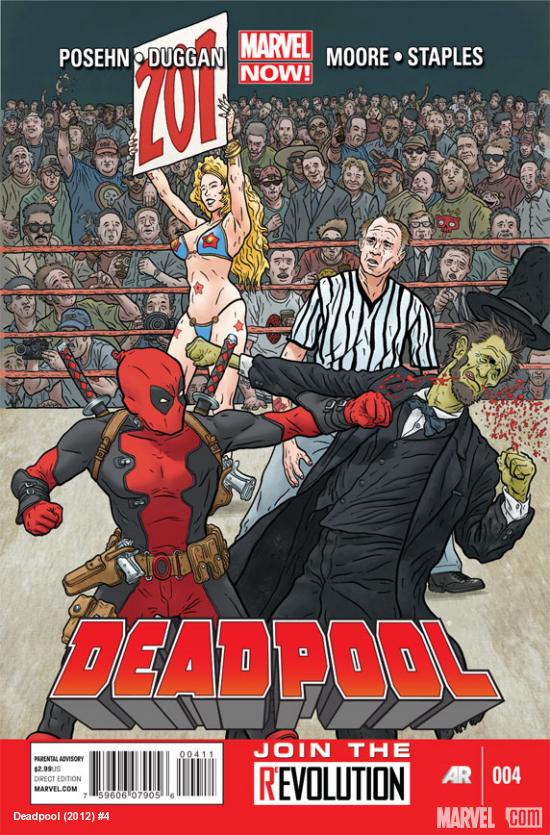 This was a weird comic. It felt like Brian Posehn and Gerry Dugan had a nice focus going for the first half of the book. While some big name presidents like Andrew Jackson and JFK go down pretty easily, it had to happen. Not every Dead President can fit the boss-villain role. (I will say the lack of They Might Be Giant jokes for James K. Polk did bum me out!)

It seems Abe Lincoln is one of the main villains, he gets half the issue to himself. (Well, he has a small cheering section of ineffective presidents). I like that it is so easy to get Honest Abe involved in an MMA match. The villains’ plans have been hilariously vague, so seeing them gather followers and get distracted makes a lot of sense.

I would have thought Adrian Van Lundgren was a real MMA fighter. He gets a pretty important role both before and during DP’s fight with Honest Abe.

Tony Moore seems to be having a good time with the book. He gets to draw DP dressed up like Marilyn Monroe while he takes out JFK (Wade’s favorite president). He also draws Posehn into the big splash page, so I’m sure there are more cameos that I’m missing. I also like that Wade’s new president slicing sword has provided Moore with a whole new type of zombie gore for the printed page.

And President Taft flies around in a bubble bath. That too.

Email ThisBlogThis!Share to TwitterShare to FacebookShare to Pinterest
Labels: Deadpool 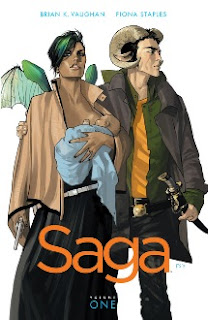 It must be me, right? I mean, this is like the most respected, beloved book in comics right now. Everyone online is talking about it all the time. People are holding it up as the current flagship to save comics. But for me, this is a decent space opera, and that’s about it.

I tried the first issue when it first came out, and while I liked some of the world building, I felt Brian Vaughn was trying too hard to be edgy. The opening line of dialogue, the fairly graphic robotic sex scene, it just seemed like it was flaunting its new R rating or something. Now that I’ve read the entire first trade, I can say that while those aspects are definitely reigned in after the first issue, they are still there. There are weird adult “touches” that make it seem a little silly. My wife actually commented on the trade when she saw it, but I didn’t suggest she try reading this one. I’m afraid those moments will make her smirk about comics all over again.

That’s not to say the narrative doesn’t have some good stuff. I like the idea of the infant narrator, and the cliffhanger is an extremely strong one. There isn’t a lot of action to be found, but when it happens, it’s pretty intense. Marko’s swift destruction of a squad of hunters gave me a whole new appreciation for him. (Until then, he was really just kind of a whiner.) Alana is harder to get a read on. Sometimes I think she’s a manic pixie dream girl, other times it seems she’s just a tough-talking smart ass.

The Will and Lying Cat are a fun combination. It’s easy to like them, based on their actions so far, but the narrator’s ominous musings about him add quite a bit of mystery and dread to his appearances. I really don’t care for the new ghost character. Her Earth-style of dialogue and fashion takes me out of the story. The ghosts look and talk like annoying kids at the mall; it depresses me to know that teenagers are the same on alien planets too.

The strongest aspects of the series involve the plot and design of the conflict. The two worlds at war are both interesting, and the denizens of each vary in neat ways. One embraces fantasy and sorcery, while the other seems to be more of a sci-fi type set up. The nicknames like “Moonies” that each faction has for the other makes the setting feel established.

It’s a great visual that Fiona Staples uses to full effect. (My wife did ask why Pink was in Saga, was that obvious to everyone else that she was Alana’s model?) Her design on the spaceships is probably my favorite part of the series. Most of the art is more emotion and “acting” based, and Staples does a great job in that respect too. You can tell just from the faces what is happening in almost every scene, even if that involves a spider/centaur lady or a telepathic cat.

My god. If I had read this as my first Batman comic back in the day, I think I would have been too scared to come back. This is another chapter in the Joker’s Death in the Family arc, basically an exercise in torturing Batman. Scott Snyder is doing a good job; I certainly am worried for Bats’ ongoing mental health. But wow, Snyder must be one sick dude.

Here is some of the horrific stuff in this issue:


If this was a movie, it would be rated X, right?

(It still gets a Fair rating, because it is an effective horror comic. Snyder is good at what he does.)
Posted by Timbotron at 8:00 AM 1 comment: