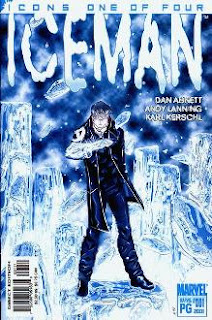 I need to go digging through my back issue bins more often! I knew I was in for a treat when I saw this was written by Dan Abnett and Andy Lanning, who now rank as two of my favorite authors. I don’t think I was quite as tuned in to their work back in 2001, though; I didn’t have any memory of this series at all.

This limited is almost entirely plot-based. Iceman has a few personal connections to the story (ex-girlfriend and child, mostly) but for the most part, this could have been any character up against an evil corporation. It’s not that Iceman is a boring character, but comparing this against Iceman’s 1985 series, and it is clear that Iceman doesn’t have quite enough depth to really support a character-based series. Iceman works great in a tough spot, though.

Iceman travels to Hong Kong to meet up with his ex-girlfriend Opal. Bobby Drake just found out that she bore his son, and he needs to help support the boy. Shortly after landing, things get mysterious when these weird mutant kids start attacking Iceman all over the place. (Iceman seems to have a public ID here, maybe that’s always been the case?) It turns out the villains actually want to harness Iceman’s powers to increase processing power for both legal and illegal creations. As you’d expect, Iceman has a problem with this. 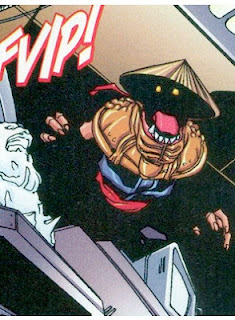 One of the best surprises in this mini is Foe Dog, an old Hong Kong super-hero. He’s got a great, fun, kung-fu design. He’s definitely the “old mentor” archetype, but his excitement at getting his powers back makes him a lot more likeable. He’s got strength, agility, and fighting skills, plus the ability to teleport through shadows (though he has to tell the shadow he’s coming). He’s a great hidden character. I wonder if he’ll ever be used again? He’s a demon fighter and super-hero, surely someone can think of a use for this guy!

Karl Kerschel shows Iceman using his powers in some neat ways. He creates ice lances, ice doubles, and of course, slides and blasts. I’m not a fan of Kerschel’s anime-inspired style, but I missed his work on issue three, where Skottie Young made everything look like graffiti. It’s too bad it is tough get even four issues with artistic consistency! Again, Kerschel’s style isn’t my first choice, but other than a few moments where it is hard to discern exactly what’s happening in a panel, I like his kinetic, frantic pacing. The art often feels like it should be racing along with a fast soundtrack.

I really liked this series, despite the non-uniformity of the art. It's a shame that these character-based "X-Men Icons" series have never been collected.