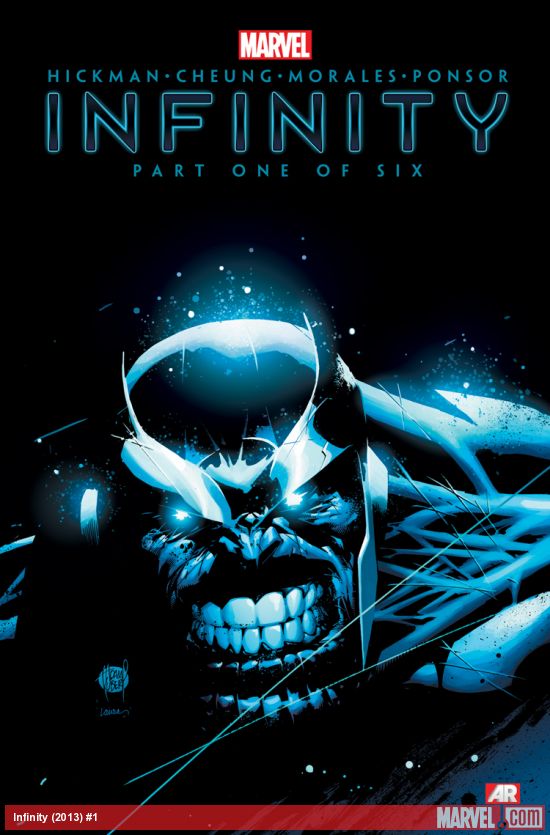 I’m not going to make any friends with this opinion, but I just can’t get in to Jonathan Hickman’s writing. I gave up on Avengers after Thor and Hyperion spent an issue talking on a hill. But I decided to give this epic, 45-part story another shot and pick up Infinity #1.

I shouldn’t have bothered. Most of the issue reprinted material from the Free Comic Book Day issue this year. While necessary, it was a repeat, so I couldn’t really make a new opinion based on it. It sort of added to the “waiting” feeling I already had with Hickman’s builders storyline.

I’ve always like the Inhumans’ costumes and designs, but as characters, I can’t get into them that much. I actually find the Eternals a bit more interesting. Adding in a ton MORE Inhumans doesn’t address my problem, and giving Black Bolt a bunch of weird wives just makes him into Bill Paxton. I think Black Bolt appears on more pages than any other Marvel hero, making this one really weird Avengers story. I mean, they really don’t do much in this one at all.

Again, if I hadn’t already read 12 issues of Avengers to start this story, I’d be a lot more forgiving of an issue where the Avengers barely appear. I never thought I’d say this, but I think I’d like Cannonball and Sunspot back on the X-Men; at least they might get a few more lines!

The weird hunter killer villain is neat, and Jimmy Cheung’s design is intimidating, but man, I bought this comic for one reason: Thanos. He appears on one page, and doesn’t do a lot on it. It’s a great moment, full dread, but I want more, especially with a comic this thick! I mean, if Infinity Gauntlet had this pacing, then the heroes wouldn’t disappear until issue 4!

This type of serious, dramatic crossover is clearly not my cup of tea. More pages doesn’t make the threat more horrifying, it just makes me more anxious to see the story develop. I need more plot for $3.99 (or more!)

Infinity is more Crusade than Gauntlet. It is proof that long, drawn out stories are EVIL.
Posted by Timbotron at 8:00 AM 4 comments:

It’s been awhile. How about a couple reviews?

After Geoff Johns’ run on GL ended with a whimper with the confusing and strange First Lantern story, I had some high hopes for Robert Vendetti’s time on the title. I’ve really enjoyed his work on Valiant’s X-O Manowar. But everyone knows how I feel about the new 52, so this was going to be an interesting showdown.

Unfortunately, I just can’t get invested in the book anymore. Vendetti’s story opens with a flush of new recruits fighting off an attack on Oa. The recruits seem interesting enough, with their non-human and sometimes silly characterizations. We even check in on a few classics like Kilowog, Soranik Natu, and Salaak. The problem is I don’t find Larfleeze funny anymore. He’s the main threat in the two first issues, and his “greedy” motivations aren’t enough to keep him interesting as an antagonist.

Even as a showcase for Hal Jordan, these three issues didn’t impress me. I’m not a Hal Jordan fan, but his stories are usually good enough to keep me interested in reading his book every month. Vendetti tries to make Jordan a little more self-sacrificing and a bit more of a leader, but I still don’t like him. Kyle’s still my GL.

Issue #23 changes the focus to Nol-Anj, a manipulative prisoner who escaped from Oa during Larfleeze’s attack. She’s a fun mastermind-type villain, but I get the impression she’s just here to prep the arrival of Relic, the Villain Month contribution to GL. These new 52 names are killing me! Don’t ask me why Grayven or Effigy didn’t bother me, but Relic does. It just seems like a random name associated with an alien villain.

Billy Tan’s work has never been a big hit with me, and his almost Jim Lee style doesn’t win me over here either. So this is getting relegated to library reads, with the rest of the new 52. Sorry GL!

This comic is evidence that comics are EVIL!
Posted by Timbotron at 12:59 PM No comments: