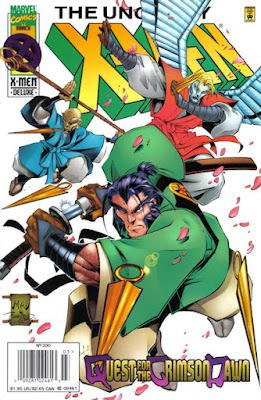 Now this is some Ninja Scroll anime action! Dressed like characters in a film, Archangel and Wolverine team up with Gomurr the Ancient and Dr. Strange to obtain a sip of the Crimson Dawn. The one mystical medicine that could save Psylocke before she dies of her Sabretooth-inflicted wounds.

And let me just point out, I find it hilarious that Psylocke is all bandaged back at the X-Mansion with only her face and a large swath of cleavage left exposed. Just like the real doctors do! Ha!

Her rescuers fight their way through an assortment of mystical type bad guys, including the well-named Undercloaks. They are another set of generic bad guys, but they look a lot cooler than the mist men from last issue. The heroes also face the odd Tar, who seems pretty petty and vindictive for a super-powerful mystic deity. He zaps Gomurr just because he's lonely.

In the end, Dr. Strange somehow pulls a Psylocke min-fig out of Archangel's heart and plunges it into the Crimson Dawn. This representation of their love allows Psylocke to survive in a burst of mystical energy. Not sure how that works, but at least it wrapped up in two issues!

One weird thing is the way Wolverine constantly calls Archangel "kid." I mean, I guess it makes sense chronologically, but Angel has been around a lot longer than Logan. I don't think of Archangel as an inexperienced hero. I am enjoying the slow degradation of Archangel's metal wings. This is leading up to my favorite incarnation of Angel, the one with faint blue skin, blonde hair, and feathered wings. It seemed like the best of both worlds in the '90's and it still does now.

I hope you've enjoyed this year's 12 Days of X-Mas, I know I did. For all the hate that Scott Lobdell gets these days, these old X-Men issues are very readable. They aren't all classics, but they have well-laid subplots, decent action, good guest stars and an interesting mix of villains. Classic foes like Juggernaut and Sabretooth show up interspersed with folks like the Gene Nation and Tar. This isn't exactly a golden age of the best X-Men comics ever, but overall, they have been 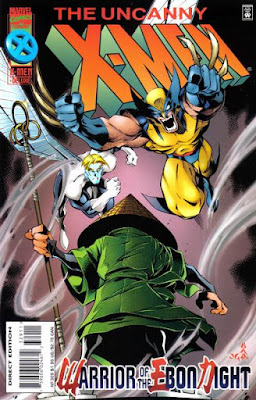 Now let's start the review of Ninja Scroll #1! Oops, that actually probably starts a little more obviously next issue, but it sure is clear what Joe Madureira likes to draw. His manga influence is clear, but this is the story where he really gets to indulge it. With Psylocke on the verge of death back at the X-Mansion, Archangel and Wolverine head out to Little Asia to find more mystical help. They end up fighting some generic photoshop smoke ninjas. The poor quality of the photoshop really pulled me out of the comic, making it hard to get through. I don't remember having this problem when I first read the comic, but tricks like this don't age well. Putting Dr. Strange floating in front of an actual picture of New York City just looks distracting, not cool or realistic.

As always, though, Mad excels when drawing the costumed heroes. Archangel and Wolverine look great, even when rocking street clothes. Dr. Strange's big scarf look is well done too.

Scott Lobdell is joined by Jeph Loeb for this arc, and I wish I could say it helped. But there is the same stilted, purple dialogue that can be extremely hard to get through. After all, when the Mandarin changed Psylocke into a ninja, she came back as "something more. And something less." Ugh.

The other thing I noticed in this issue is how overpowering the caption boxes became. This is almost Chris Claremont levels of text crowding each panel. Trust the artist to tell the story, man! Joe Mad can handle it!

I had fond memories of this issue, but on re-reading it, I don't think it quite held up to my memories. The awful photoshop smoke warrior and the captions made it a lot harder to lose myself in the action than some of my other X-Mas reads. 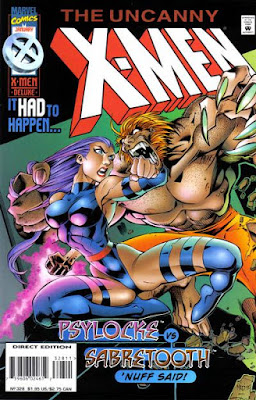 It is hard to admit, but clearly Scott Lobdell had a theme during this run of his X-Men comics. That theme is redemption. Joseph, Marrow, Sabretooth, and Gambit all struggled with it. Each character accepting and moving on... or not, in Sabretooth's case.

It turns out that the childlike Sabretooth who had been hanging in the Danger Room and chumming around with Boom Boom was faking. It is refreshing to see that not ever villain got "Venom'ed" into being a good guy in the 1990's. Nope, Sabretooth was faking, and as he makes clear in his dialogue this issue, he loves being bad.

He spends a long while needling Professor X about how silly it was for the Professor to think he can fix everything. This sequence includes a great bit of characterization when Cyclops talks about his code against killing. Scenes like this are the reason why I have such a disconnect from modern iterations of the character. (Hawkeye has the same problem for me in the Avengers titles.)

After the Professor, Cyclops and Jean Grey leave, Sabretooth works some manipulation magic on Boom Boom to make her blast him free of his restraints. Boom Boom comes off as a pretty stupid character here, one that it is hard to have a lot of sympathy for. She's got to be smarter than this, especially when Psylocke is the person that ends up paying the price.

Joe Madureira must have been licking his chops at the thought of drawing this issue. He's got the ninja psylocke running around in her swimsuit and the gigantic, hirsute Sabretooth locked up like Hannibal Lecter until his escape. It is very much like Silence of the Lambs, including the facial restraints Victor Creed wears for most of the issue. As for Psylocke, she has the shiniest breasts in comic book history in this one. An odd trophy, but one she deserves for a couple panels in this issue.

Mad didn't have enough time to set hte mood or to really follow up the classic Psylocke v. Sabretooth fight from Uncanny X-Men #213. Still, he does a nice job portraying Sabretooth's savage nature with both violence and facial expressions. Sabretooth is pretty much an irredeemable monster, and I can't wait to see him get what he deserves. (Unfortunately, I don't remember what book that happens in!) 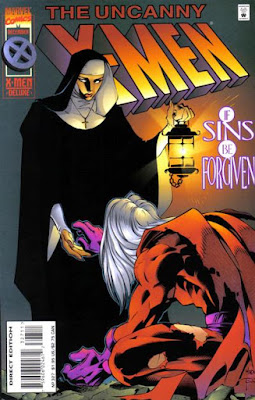 Oof. Guys. I'm sorry. This is the issue that introduces Joseph into X-Men canon. At this point, I can't remember who exactly Joseph ended up being. (Wasn't he a clone of Magneto?) It seems clear that in Scott Lobdell's original story, this guy is supposed to be a de-aged Magneto who is young enough (in his twenties) to join the X-Men.

What a horrible, messed up idea. The purple prose and generic story don't help. Joseph wakes up in a South American orphanage where he befriends a beautiful nun and her youthful charges. Other than a few outbursts about Nazis and a fascination with mutants, Joseph seems pretty happy to bum around the farm.

But when pushed, he lets out the old Magneto and slaughters a group of drug runners who kidnapped his new friends. This story takes the whole issue to play out, with plenty of formulaic interactions and heavy handed dialogue about redemption. Hell, the cover summarizes the quality in one line "If SINS be FORGIVEN." Ugh.

Roger Cruz is on art again, and man, his stuff was not so good. He is clearly doing a similar style as Joe Mad, but his faces are far more inconsistent and the level of detail varies wildly from page to page. Perhaps drawing more costumes might have helped, but the grounded tone of the issue is not a good match for Cruz.

Sometimes it is impossible to read a comic and not dread what I know is coming later. Joseph's first appearance and his weird place in X-Men lore falls into that category.

Poor
Posted by Timbotron at 8:00 AM No comments: 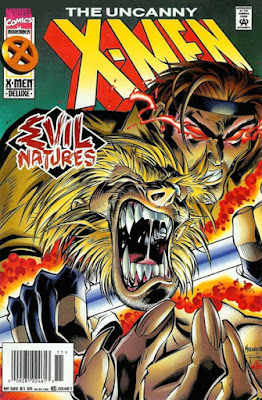 Today's issue has us getting more glimpses into Gambit's mysterious past before he joined the X-Men. In case you don't remember, Gambit was working for Mr. Sinister back in the old days, and he led the Marauders to the Morlocks before the Mutant Massacre. The guilt is ripping Remy LeBeau up, so he takes out his anger on the lobotomized Sabretooth the X-Men are "rehabilitating."

It's not even much of a fight, because Sabretooth is basically in a child-like state of mind. Now whether or not he's faking is still not clear as of this issue, but it is still a neat scene when Gambit has holograms of Creed's victims start showing up and accusing him of his past murders.

I'm not certain the continuity lines up anymore though. Since James Howlett and Sabretooth were kids around 1900, it makes the timeline for Creed's first murders when he was 9 seem a little bit off. Either way, it is a good scene. And at the close of the issue it sure looks like Sabretooth might be turning back into the bad guy we know and love.

There are a lot of pages dedicated to the Legacy Virus too. These pages don't hold my attention too well, as the whole arc seemed weird. I know the X-Men always stand in for the current persecuted people of the day, but the HIV/Legacy Virus thing was a big heavy handed.

It certainly doesn't help that the Legacy Virus took out Moira MacTaggart, a valuable supporting cast member who deserved a better send off.

Joe Madureira's art was so revolutionary at this time, I remember loving it. Now I'm struck by the lack of backgrounds and the heavy use of computer-generated images to try and give each page a sense of place. It's a pity that the foreground characters look so dynamic yet the primitive photoshop work doesn't. Again, Mad's Beast is the highlight of the issue, but he draws a mean Gambit too. I like the simplified outfit Storm has in this era too.