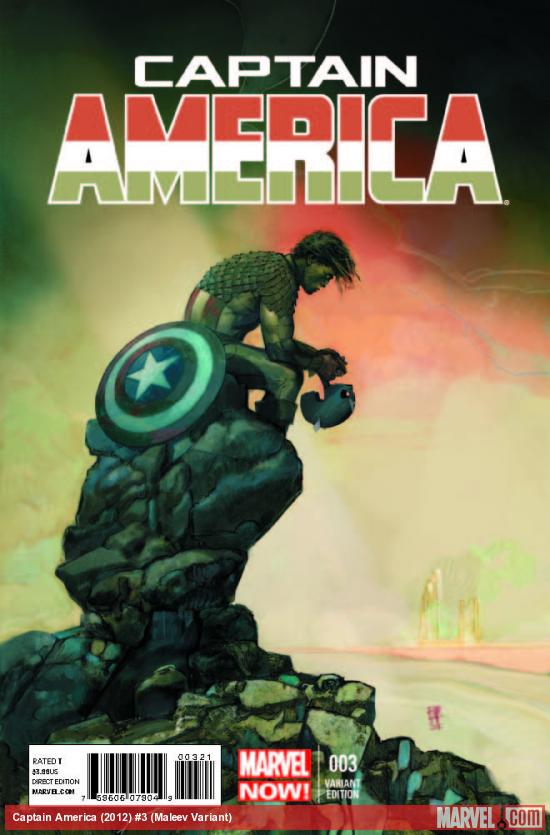 Wow, this really is a pretty drastic shift in tone from Ed Brubaker’s run, huh?

I have liked just about all of Rick Remender’s output over the last few years, and I like his Cap, too. But I’m not liking it as much as I thought I would. I’m not sure jumping into an alien dimension story is the right way to kick off a relaunch like this. The tone and feeling in issue 1, where Cap was facing the Green Skull and then dealing with long-time foe Arnim Zola is more what I was hoping for from this book.

Don’t get me wrong, I’m thrilled that Arnim Zola is getting this spotlight and that the bio-fanatic is such a threat for Cap. But this is the second issue where Zola has been a more off-screen presence than on, and where the main antagonists are big, weird-looking creatures drawn by John Romita Jr.

This issue quickly establishes a bond between Cap and an alien family so that there will be some resonance when the family suffers a loss. It’s just too quick and too alien to have a huge impact. I understand a fair amount of time passes in those few pages, but it’s not enough to make the reader get too wound up.

Of course, the final page reveal shows what Remender has had up his sleeve this whole time. Cap has picked up more than an adopted son during his travels around Dimension Z, and Romita really sells the horror on Cap’s face and the triumph on Zola’s. I’m very excited to see Cap facing down some villains that don’t look like Romita’s Limbo demons from Inferno, and this final cliffhanger gives me hope that is coming.

Fair
Posted by Timbotron at 8:00 AM