Comics on the Bubble: Avengers: Fear Itself 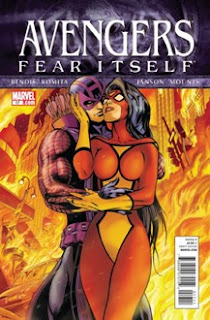 This run of comics is a fascinating exercise. For me, it’s proof that Bendis can write solid, super-hero action. Now, due to the jumping nature of the plot, he usually gets to dodge any resolution for the battles, but he actually choreographs some neat battles. I still can’t stand the way he writes Hawkeye, it just feels off, but some of his Avengers actually work. In fact, only after reading these issues do I feel like Protector isactually a legitimate member of the team. (I dropped the book at issue 6, and then picked up at 19, so he never did anything that I saw.) I also dislike the interview format as a bridge for the issues, it’s all too reality TV for me. But the actual fighting is pretty good. Top notch artists sure don’t hurt.
Issue 13: Chris Bachalo tries, but this is a talky book. Alan Davis’ cover is the best part. Keep, barely.

Issue 15: Ms. Marvel, Hawkeye, Spider-Woman, and Protector vs. Feared Up Hulk! Not bad, even if that Avengers team doesn’t have a chance. Bachalo makes it pretty. Hawkeye and Spider-Woman just don’t make sense as a couple! Keep

Issue 17: Romita Jr. handles the combined Avengers vs. Sin. I wish Romita Jr. had more panel time to draw old Iron Man armors. What we get here is just a tease. Keep

So this is a run I think I’ll hold on to. It’s all fighting, and mostly in costume. I’ll skip the video confessional bits on future readings, but top artists drawing people smashing is why I read comics!
Posted by Timbotron at 8:30 PM