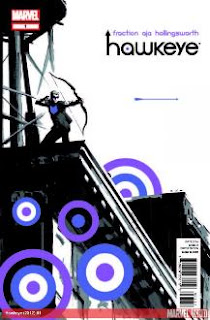 Why is it that whenever someone starts up a new Hawkeye series, it’s always about Hawkeye the “normal” guy? Fabian Nicieza did it in the 90’s, and Matt Fraction is doing it again here. Now, it’s not that either guy did a bad job telling the story of a normal joe, but I vastly prefer Jim McCann’s take, with Hawkeye and Mockingbird taking on costumed villains in a true Avengers spin-off. I’m not saying I want a generic super-hero book like Hawkeye’s few one-shots in the 90’s, but I want some super-action!

This series is focusing on Hawkeye in his off-duty life. He lives in an apartment building in New York in an area where he is rarely recognized. It lets him keep a hand in a “normal” life. The problem is that he’s got normal problems to go with it. In this case, it’s a hilarious Russian gangster trying to push the tenants out of Hawk’s building. Is that a thing? Russians using “bro” this much? I mean, I find it hilarious, and it is a fast way to establish a new character, I’m just curious. Is it for real?

I had read that Kate Bishop, the Hawkeye from Young Avengers would be in the title, but no sign of her so far. In fact, it seems Hawkeye is getting a dog, so this may end up as some kind of Hawkeye Family title! (I’m fine with that, remember how much I loved Hawkeye & Mockingbird a year ago?)

David Aja’s art is as gorgeous as ever. Each page evokes mood and atmosphere in a tangible way. The tracksuit goons look tremendous; in fact, this whole book looks like an HBO series it’s so well drawn. Aja is the newest artists to fail at making Hawkeye’s current costume look cool, though. Seeing the real costume on the letters page just drives home how awful this current design is. I can’t understand why everyone is so ashamed of making Hawk look like a super-hero?

I will be back for the second issue, but I do not love the book yet. Perhaps if I re-level my expectations that this is a crime book, I’ll enjoy the next issue more. I went in to this one hoping for a super-title and got a strong crime adventure instead. Next month I’ll know what to expect.