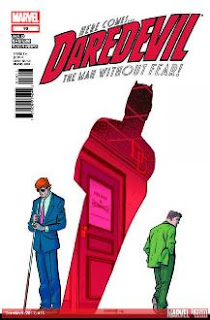 Hoo boy, as if this title needed to win me over any more. Mark Waid was already delivering the most exciting, innovative super-hero title on the stands, and then he goes and features one of my favorite characters. That’s right, when it’s time to re-set DD’s hypersenses; it’s time to walk around in ol’ Hornhead’s skull. And Hank Pym is the man for the job.

Waid uses this set-up as a chance to parallel the extremely difficult lives these two heroes have led. It’s pretty strange, seeing the names and faces juxtaposed between the two heroes, but it’s a neat effect. And man, does Chris Samnee sell the inner-ear action, with Pym hauling around an EMP gun, blasting away at the nanobots planted a few issues ago. In fact, I need to see if I can buy one of these pages, I need one on my comic cave wall! I’m sure this isn’t a relationship we’ll see again soon. Pym and DD don’t cross paths much, but man; it sure would be neat seeing these two sad-sacks hang out!

As for the secret in Matt Murdock’s desk, it’s a creepy one. I’m not sure if I believe Murdock or not when he protests his innocence, and that’s why it is so believable that Foggy Nelson is booting Matt from the practice. It’s another great twist that leaves Murdock’s life in shambles. After getting a beating for two issues then losing his job, can Daredevil hold on to his sanity? (I hope so!)

Again, Samnee’s art is just gorgeous. His Tony Stark has a casual look that just cracks me up, and he actually makes Dr. Strange’s boring costume seem OK. I can’t wait to see Samnee take on more costumed characters.

Posted by Timbotron at 8:00 AM