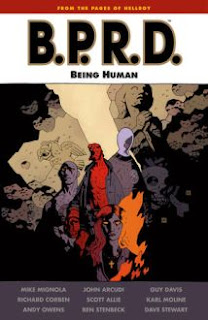 There’s got to be a common theme in my reviews these days, and it’s that I seem to be enjoying these creator-produced books more than the corporate ones. Not overall, but in general. BPRD continues to be one of the strongest titles on the stands, with stories that thrill and frighten, with art that grabs hold of your imagination and doesn’t let go.

This book in particular has a stacked deck. Written by Mike Mignola, Scott Allie, and John Arcudi, a list that includes two of my favorites. The Dead Remembered by Mignola and Allie is a neat glimpse into Liz Sherman’s first days with the BPRD. I worry a little about the timeline, she’s already a teenager in the 70’s, but that’s a small issue. I like seeing her interact with more of the normal world. And seeing the Professor interact with some of his friends is a nice touch too. Karl Moline excels with the younger characters, but his art isn’t scary. I don’t get lost in a panic reading even the spookiest scenes.

Now Guy Davis, his stuff scares the hell out of me. The short story Casualties by Mignola and Allie is horrifying in just 8 pages. That is one scary werewolf! And the panel where he looms out of the darkness? I want to own that page!

My affection for Richard Corben’s artwork is well documented. The guy draws horror, emotion, action, he can do everything. His Hellboy is iconic, and his work with Roger makes me miss the big guy even more. Corben’s work promises a few things: hulking dudes, overly endowed women (but not exploitative), and dynamic action. Being Human delivers.

I feel like I’ve read The Ectoplasmic Man before, but I loved it once again. Johann Strauss is a hard character to really root for, but his heart is in the right place. I love that his melancholy at his ghost-state is overcome by his thirst for justice. And it doesn’t hurt that Ben Stenbeck’s style is distinctly Guy Davis-y at numerous points in that story.