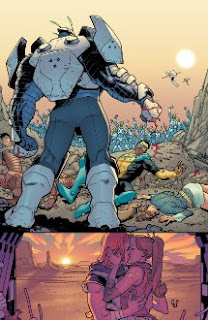 Aw man, Kirkman is still tugging at my heartstrings with the lost romance of Monster Girl and Robot. I want to see it work out for those two! I finally have some hope, after this issue’s confession from Robot. We also have a possible reason for the difficulties between the two of them, and boy, it’s a doozy. I won’t ruin that last page, but it does shed some new light on Robot and MG’s issues.

Bulletproof as Invincible really doesn’t get much screen time in this one. He’s on maybe, three pages? It’s too bad, I’ve made my affection for the concept clear, and I hope we don’t get to Mark Grayson’s triumphant return too quickly. I’m now holding out hope that Mark comes back in issue 125 rather than the much more likely #100.

I am happy that the Guardians of the Globe are featured so prominently. I’m already planning on picking up their spin-off in the fall.

Cory Walker does the heavy lifting in this issue, with a lot more detail about Robot and MG’s time in the alien dimension. (He also gets to do one of the best cameos ever for Kirkman-creation Tech Jacket.) Walker is solid; he’s a good storyteller with lots of emotion on the page. But I love Ryan Ottley’s dynamic, cartoony pencils. I’m OK with a timeshare as long as Ottley keeps up with the “current” segments of the book.