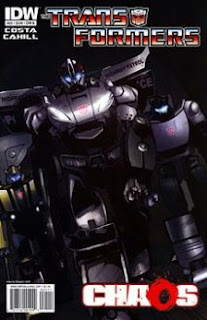 Now THIS is what I was looking for in my Transformers comics! I feel the IDW line really lost its way after All Hail Megatron. The books were just sort of flopping around. The relationship with Spike and the humans isn’t why anyone is picking up the book, I figure, and the Decepticons on the run aren’t an interesting enough threat. I actually didn’t buy any Transformer trades for quite awhile. Fortunately, Comixology had a big sale and I caught back up. (I’m not going to review Heart of Darkness or the Chaos prelude, both were fairly boring.)

This trade moves along nicely. It focuses on Prowl and the other Earth-bound transformers as they try to investigate a few mysteries from earlier in the series. You see, Spike really hates the Transformers, and in a great scene, he actually states that he will never trust any of them, leaving Prowl looking like a fool for liking and trusting Spike. As always, the humans are the real bad guys. (Of course!) There’s a lot of procedure work as Prowl (and partner Streetwise) bomb around investigating who killed the Constructicon Scrapper earlier in the series. They also want to figure out who distributed all those Megatron bot-killer pistols earlier in the book too. Both masterminds have been choreographed well, so everything makes sense, and it leaves the Autobots in a position where I’m not sure they can stick around Earth much longer.

For those of you who just want to know which Transformers appear in Transformers: Police Action, here’s your list, starting with the most featured: Prowl, Bumblebee, Ultra Magnus, Jazz, Streetwise, the Protectobots, Brawl, and Swindle. (There are a few more cameos, including Seaspray and Windcharger, but that list is the main guys.)

I can’t emphasize enough how bored I was by the Transformers universe before this trade. Mike Costa and artist E.J. Su deserve a lot of credit for bringing me back on board.