Greg Pak and Fred Van Lente are crafting a modern Marvel classic. These stories don't change your life or make you re-imagine your thoughts about comics, but they are darn fun.

Hercules and Namora are off frolicking on an island when a group of Amazons kidnap Amadeus Cho and make off with him back to a Lemurion museum they've taken over. This brings Namor into the story, and there is a wonderful sequence where he and Hercules start battling until Namora stops them. It turns out Hercules knew they didn't need to fight, but he didn't think it was worth stopping the fight over a little detail. That's just awesome. Hercules' casual attitude about his protege's time with the Amazons is hilarious from start to finish, as he's just hoping Cho can get some action.

Meanwhile, Cho doesn't hit it off with the leader of the Amazons as he figured, but with an interesting gorgon-lady who is quite taken with him. I really dug the star-crossed infatuation the two shared, especially with the sad resolution that we all knew was coming. Cho couldn't really be happy, could he? As always, there is the required rib on Cho's "Fifth-smartest person" status too, as he's forced to admit he got the label from a soup company.

Namora was great in this, she's a fantastic character and I can't wait for the new Agents of Atlas trade. Namora is pretty much a lady-Hercules. She's out to smash people and have a good time. If she keeps appearing in books like this, she may quickly make it into my list of favorite characters. The other revelation in this trade was the first appearance of the Olympus Group, Hera's corporate posse of evil gods out to get Hercules. I'm excited to see what comes of that in upcoming trades. 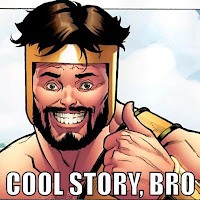 Clayton Henry does a great job here. His core cast look good, of course, but I was really impressed that he succeeded in making a snake-headed Gorgon cute. Plus, he provided us with what might be the best Hercules panel ever.