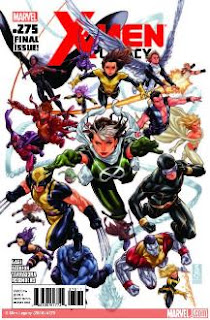 What a great way for Christos Gage to wrap up his run on X-Men Legacy. He’s stated that the book never quite materialized as he hoped, and I can see that. The stronger issues show what could have been, so I’m happy that the final story shows Gage’s strengths so nicely.

This was always going to be a book about Rogue, and the focus is squarely on her in this issue. Unlike some of the run, this one has Rogue dealing with familiar foes and working with one of her teammates while putting down a prison break. Seeing Rogue tap into the abilities of so many villains is a joy. The contrast between her and Mimic is a natural and effective one. Mimic in the main Marvel U has never been as cool as the one in Exiles, but I suppose there is some potential here. I don’t know that anyone will use him soon, but he is in a good place to be a future guest star.

Rogue has her head on straight. I’d argue she has since Mike Carey took over this title, but the strong closing page clearly establishes that Rogue’s spot on the X-Men and in the Marvel U is well established. Rick Remender will be taking the character now that she’s in Uncanny Avengers; it will be interesting to see if his take is as confident and powerful as Gage’s.

David Baldeon does a nice job with the sprawling cast of prisoners who show up this issue. Gage lines up a great set of small-time villains, mostly 70’s villains from Marvel Team-Up and Spectacular Spider-Man. A fair amount of these guys are Bill Mantlo villains, right? Equinox the Thermodynamic Man, Armadillo, Man-Bull, Light Master, and Ruby Thursday are just some of the obscure names I recall from my back-issue bins. Baldeon’s best scene is Rogue’s souped-up form while she’s channeling a ton of villains. She’s got major junk in the trunk while packing Armadillo’s tail.

Gage is one of my favorite Marvel writers, with his love of continuity and his devotion to cult characters. I never connected with his work on this series quite as much as I’d hoped, but it was still an entertaining run. At the least, he brushed off a lot of good Marvel characters.