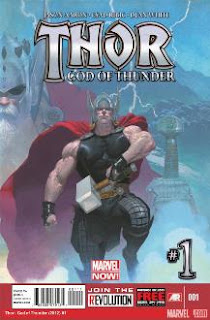 I had high hopes for this book; fortunately, Jason Aaron rarely disappoints. I was a little unsure about the high concept of the opening arc, that we’d see Thor in three different time periods, facing down the same god-killer in each time. I’m not sure if it will get tiresome by the end, but for right now, the concept works very nicely.

In the past, Thor is a young god, pre-Mjolnir. He’s out partying with the mortals after killing a frost giant when a Native American deity washes up on the shore, butchered. This Thor is young and a bit unsure of himself. He has to take some hints from the local priest. I’m not sure how the battle will go down, but this Thor is definitely under-powered.

The present-day Thor is the guy we know from the Avengers. Sporting his current armor, the god of thunder is flying around the galaxy doing godly work. When his travels take him to a planet with no gods, he immediately becomes suspicious. I love the idea that Thor just swoops up into the sky and easily locates the dark city of the gods. Of course it’s right up there. Of course you can just fly up to it. Why wouldn’t that work? This is our introduction to the god-killer’s underlings too.

The future Thor is Odin-esque. He’s missing an arm and wielding Mjolnir, the Odinsword, and wearing parts of the Destroyer as armor. This must be one tough old god. He’s the last of the Asgardians, maybe the last of the gods, and he’s trying to face down an army of creatures swarming through Asgard.

Esad Ribic’s art is gorgeous. Of the three Thors, the modern-day one is the coolest, so I’m happy that Ribic draws him the most. I’m also impressed by the set design and the atmosphere of the dead gods’ city. It felt almost like Prometheus’ sense of lost creatures beyond our scope. It is a very well developed atmosphere in only a few pages.