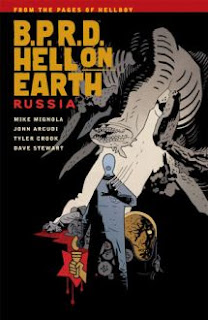 HAPPY HALLOWEEN! Let’s celebrate with some fantastic horror comics, shall we?


I’ve long been on record with my love of the Dark Horse Mignola-verse, and that statement continues unchallenged. Mike Mignola and John Arcudi deliver another gut-punch of action and drama as they send Johann Krauss and Kate Corrigan. (Devon, the newest field agent gets some groundwork set for the next mini-series, including an interesting reveal about his past, but that’s only about 10 pages or so).

Kate and Johann are summoned to Russia to deal with another horrific situation. Infected citizens are turning into monsters and going berserk. Plus the dead have risen and are building some unnatural throne above an old mine. The Russian BPRD is on the case, but they can benefit from some good ol’ BPRD know-how. The head of the Russian’s Supernatural Service is Iosif, who we saw as a silent, mopey zombie back in Abe Sapien’s Abyssal Plain series. Iosif is a jolly, friendly zombie now, living in a seawater-filled diving suit. He’s a huge fan of both Corrigan and Johann, and in fact states that he and Johann are practically brothers due to their strange conditions. This guy is fantastic, and I hope he gets to stick around. We need more good monsters to make up for losing Hellboy, Roger, and the rest!

Johann is always so desperate for any connection; I loved seeing these two grow closer as the series wore on. Plus it is neat seeing the Russian commandos work with Johann and battle their way to the Cthullian monster in the mine. The commandos’ design is fantastic, and seeing them packing flamethrowers and acid sprayers made me like them; Mignola and Arcudi give the commandos an amazing amount of personality considering we only see those guys for a few pages!

The design work doesn’t stop with the commando designs. Johann gets a new suit (based on one of Iosef’s old suits). It looks a lot closer to the nice, combat-capable rig Johann sported in Hellboy 2. Maybe Johann will finally fit in on those field missions now! Abe Sapien spends this one in a coma, but he does seem to be recovering. The problem is, he’s a lot more lizard or fish-like than he was before; I just hope we can still get some of that great expression on his new, dangerous features.

Tyler Crook had massive shoes to fill, taking over for the fantastic Guy Davis. But he’s done it. The bonus materials show an artist who knows and respects the giants who’ve gone before, but Crook clearly stamps this material as his own. From the casual power in Iosef’s suit to the horrific “taking” of Johann’s commando team, this book is gorgeous and disturbing. As I’ve said before: best comic on the stands.