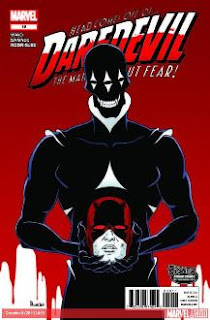 Dang. Congrats to Mark Waid and the Marvel solicitations department for not giving away the swerve in this issue. I mean, it’s not like a Darth Vader is Luke’s father-level reveal, but still, I appreciate when companies can actually get a surprise out the door. The identity of DD’s current nemesis is a good one.

I’ve seen Waid state in some interviews that he likes the relationship between Matt Murdock and Hank Pym. It makes so much sense, the characters have a lot in common, and they do play well off each other. Murdock and Pym have another brief chance to bond this issue, and it really could end up as a neat pairing. Any hope of an in-costume team-up? Supporting your teammates is one thing, but I’m ready for them to banter while on a mission!

One of the most effective portions of this comic is Foggy Nelson’s crippling doubt about his best friend. From his drunken confession to Matt’s current ladyfriend to his concerned but cruel call to DD, Foggy is making things tough. When Matt Murdock actually decides not to swing across town, but instead to take the bus? What a sad statement for our hero.

Things look bad at the close, but I will never tire of seeing DD banter while knocking out thugs. It’s Daredevil’s natural state, and Waid handles it perfectly.

Well, Coyote is one weird, creepy dude. Chris Samnee has to sell the scene, and boy, does he ever. Daredevil is in a predicament I don’t think I’ve ever seen in a previous comic. Murdock has always had a good head on his shoulders, but I don’t see an easy way out of this. Plus, Coyote’s look is so unnatural and non-human… yuck. He almost gives you the creeps just looking at him! Great design!

Waid's run on DD can't come any more hightly recommended. It is probably the best superhero comic out there right now.