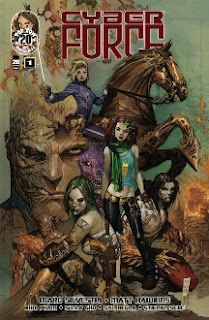 I don’t understand what is happening in this comic. Now I admit, I haven’t read Cyberforce for a very long time. Like everyone else, I read the series in the 90’s when Marc Silvestri first started it up. But that comic was very, very different than the one I just read. So this thing is clearly a reboot, then, right? With some similar names, and maybe a few nods to the original designs? Cause I’m not seeing a lot more connections to what I think of as “Cyberforce” when I read this comic.

Instead of a present-day actioner, Matt Hawkins is telling the tale of a futuristic world of have and have-nots. The main team is made up of different model cyborgs that are resisting the leadership of the elite. It seems this is some sort of post-apocalyptic scenario, but there are still news reports, cops, and other “normal” bits of the world holding on.

I found the narrative style to be a bit confusing. Having out-of-sequence panels with sequential narration, combined with an alternate future story and new characters? But those characters have familiar names? That’s a lot of new information to try and process all at once. I was an English major and I still couldn’t tell you exactly what’s happening here.

I’ve always liked Khoi Pham’s artwork. He tends to use scratchy lines, and those work well on all the rubble and destruction lying around in this future. The design work is lacking, in my opinion. The modern SHOC troops are in big, prong-y armor that just doesn’t seem too effective. The actual core cast look very similar too, I sometimes had a hard time picking out the different team members.

Posted by Timbotron at 1:45 PM

Email ThisBlogThis!Share to TwitterShare to FacebookShare to Pinterest
Labels: Image