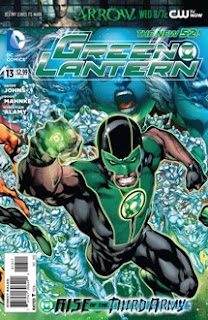 Geoff Johns is taking an interesting approach to the Third Army storyline. The horrific, assimilating baddies are still on the move and doing their thing, but most of the issue fills out the origin for Baz, our newest Earth Green Lantern.

I still find his complicated arrest story a bit too much be believed, but he certainly does seem like a nice guy at least. Giving him a solid family not only grounds the character with a strong supporting cast, it also sets up lots of potential murder victims in future storylines. (This is the new 52 after all!)

I think one of the more interesting segments in this chapter involve the contrasting, yelling directions Baz gets when Sinestro and Hal both try to prep their replacement. For someone not grounded in years of Green Lantern comics, this would all be a bit confusing.

So I’m trying to think back to Johns’ other stories. Certainly the Black Lanterns and Third Army both have that “fear of assimilation,” “we will become the enemy” type of situation. Would the Alpha Lanterns apply? Is this a modern affectation, or has Johns been using it for awhile? Surely Johns wants to use Eclipso!

Doug Mahnke turns in another solid effort. He almost makes it reasonable that Baz would be sporting that ski-mask on his costume, too. Not sure why you’d wear it if you have a pretty recognizable tattoo, though. I’ve seen enough cop shows to know that the police can make a pretty easy ID off of something like that.

As for the last page cliffhanger? Why? I was trying to pretend the reboot didn't happen, Johns! How am I going to do that if I have to look at this silly League?