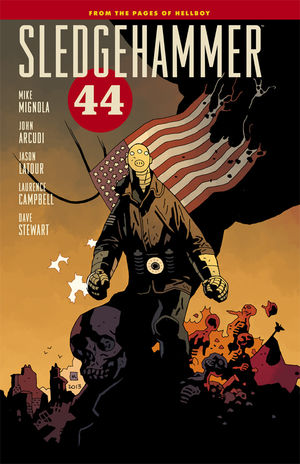 Now this is interesting. With Mike Mignola’s monster-bashing hero Hellboy in a mighty strange place, I like seeing Mignola and John Arcudi bring in another working-class hero to bash Nazi’s and smash monsters. The visuals between Sledgehammer and Hellboy are mighty similar, with the baggy pants, bulky bodies, and thrashing fists.

But while the visuals are similar, the leads’ personalities are very different. Hellboy is a working class guy doing his best with a simple approach. Sledgehammer is more of a sad-sack barely willing himself into heroics. Its’ actually a tad more complicated than that, as there are multiple guys using the Sledgehammer name and powers in the first trade. Neither of the two driving personalities are very dynamic, although the second is at least determined once he gets moving.

The first few issues follow Sledgehammer’s initial deployment in the theaters of World War II. It’s a fun story, focusing more on the “support” team backing ‘Hammer up. The idea of the soldiers as backup is driven home in the dialogue, making it a lot more shocking when the soldiers end up having to carry the load. There are some fun, straight-up war sequences in the first limited series, totally devoid of any horror or supernatural elements.

The second arc gives ‘Hammer a super-villain to fight; the Black Flame. I can’t remember what we’ve seen the Flame do before, but in this he’s zooming through the sky and blasting into the ground like a comet. He’s much more of a superman than I remember, but he does make for an intimidating opponent. Sledgehammer does OK against him, but man, the Flame seems to have him outclassed. Again, keeping the story grounded with lots of soldiers and low-powered protagonists keeps the book grounded.

Jason LaTour and Laurence Campbell have different styles, with LaTour’s faces on the American soldiers almost looking like the Sunday funnies. This doesn’t take away from the drama in the story, but the look gives the opening arc a very different feel than normal BPRD titles. He does a crackerjack job on the Nazi super-robots, though!

Laurence Campbell has a grittier, tighter style that really works for the Black Flame. There are two or three sequences of mid-air combat that really impressed me. Setting the super-fight in the clouds surrounded by bombers and thunderheads makes for a hell of a dramatic and cinematic sequence. This is good-looking stuff.

This is still a GOOD comic, but it isn’t as good as BPRD and Hellboy. Those other books have had years to establish themselves, so I have hope for Sledgehammer. But for now, this is very far behind the other titles in the Mignola-universe.
Posted by Timbotron at 8:00 AM