DC Rebirth #1: More an Essay Than a Review

So everyone is having their say about DC Comics’ Rebirth special, and why should I be any different? Like everyone else, I picked it up on Wednesday, and like most other people, I think I had a mostly positive reaction to it.

So basically, Geoff Johns uses Rebirth to bring back Wally West, a much-missed character that never really appeared in the New 52. (I guess a more TV-ified version made it in, but I haven’t read too many DC books for the last few years so I’m not sure.)

Anyway, Wally has been trapped in the Speed Force for the past few years of comics time and he’s been unable to return to the DCU. In addition, like the characters we’ve actually been reading about, he de-aged about 10 years, although Wally still remembers the crazy stuff that happened to him.

Wally spends the issue bouncing around the DCU and either peeking in on characters who are about to get a push or actually making brief contact. From this, we know that Batman, the Legion, the JSA, Blue Beetle(s), Dr. Fate, the Atom, and more are all going to be featured by DC Comics. Even better, we see that they are all looking a lot more familiar, as Johns’ talented crew of artists undo a lot of the horrid New 52 design work and make these heroes look more like how we all picture them.

Some of the more standout moments include Batman realizing there are three Jokers, all of which seem pretty different. Aquaman and Mera are getting engaged to be married. This is a big deal because one of the well-publicized rules of the New 52 was that no heroes could be married, because then they’d be “too happy.” If you didn’t care for the armored, extra-bland New 52-Superman, you’re in luck, because this issue checks in with a Lois Lane-married, older Superman who seems a lot like the one we lost before Flashpoint. Heck, he even has Jonathan Kent with him (the Rebirth-era Superboy).

It also comes out that Wonder Woman has a twin brother. I’m pretty sure he gets namedropped as “Jason,” so my money is on Jason Blood (Etrigan the Demon’s alternate self) being Wonder Woman’s bro. It doesn’t really hurt either character and could be fun.

As Wally makes heartbreaking contact with his closest relations, it seems everything is doomed, but Johns does a great job concluding Wally’s dangerous state. I found myself very invested in Wally’s fate, even though I haven’t cared for DC Comics at all over the last few years. 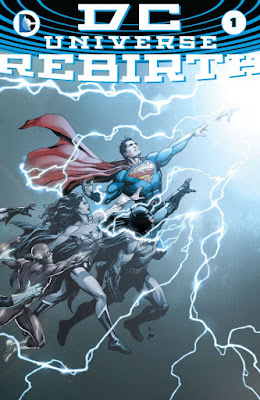 After Wally is reunited with an old friend, Wally starts going on and on about how someone was WATCHING. How someone brought DARKNESS into the DCU and took away all the hope, love, and light that used to make heroes so great. Is that someone publisher Dan DiDio or Geoff Johns? Because they are the ones who created all these abysmal stories for the past 10 years. Nope, it’s way more meta than that.

It seems that the Watchmen’s Dr. Manhattan, after the close of that magnificent series, infected the DCU. We even get some recycled Watchmen dialogue about how Dr. M wants a chance to create some life himself. So Dr. M either CREATED the DCU, or he heavily influenced it for the past 10 years or so. That would make Dr. Manhattan, not the actual DC Comics publisher, responsible for aberrations like Identity Crisis, Countdown to Infinite Crisis, Flashpoint, and the New 52. That is one ballsy move!

Clearly, DiDio and Johns were influenced by those “adult” stories in the mid-80s. Watchmen truly did change the course of the books DC Comics published. But in the world of the DCU, Dr. Manhattan actually floated out of his world and into the main publishing line. How insane is that?

So Dr. Manhattan is in the DCU. And I don’t think he came alone. It seems pretty clear that Johns has been planning this awhile, because Dr. Oz from some recent Superman stories sure reminds me of Ozymandius. Who else laughed at non-funny things besides the Joker? The Comedian, maybe?

Lots of folks have expressed dismay about the reuse of the Watchmen characters, but to be honest, for me, that ship sailed when DC published the Before Watchmen stuff a few years ago. DC Comics is clearly desperate. With their sales plummeting and interest in their comics waning, they had to do something big. And Rebirth qualifies. This is a grand, desperate attempt to court long-time readers and convince them that they can still read about a recognizable DCU.

And you know what? For me, it worked. The characters looked like they were supposed to. They sound like I expect. The mission statement of hope, love, and cooperation in the face of danger certainly sounds like what I want from DC. So I’m going to give them a chance. I’m planning on getting Batman, Superman, Blue Beetle, and Aquaman. I might be convinced to try JLA too, if I hear good things about Bryan Hitch’s writing.

[I asked my 11-year-old daughter, a pretty big comic fan, to read the issue and see how much of it resonated with her. She had zero understanding of any Watchmen bits, but overall still liked the book. She liked both Flashes, Blue Beetle, and mentioned that Superman needed to shave off his beard. She also liked the art in almost every chapter. She seems most excited about the upcoming Blue Beetle comic, proving that she truly is my daughter.]

So you did it, DC. You got me to give you another chance after I was long gone. I really don’t want you to mess it up.

Posted by Timbotron at 4:37 PM