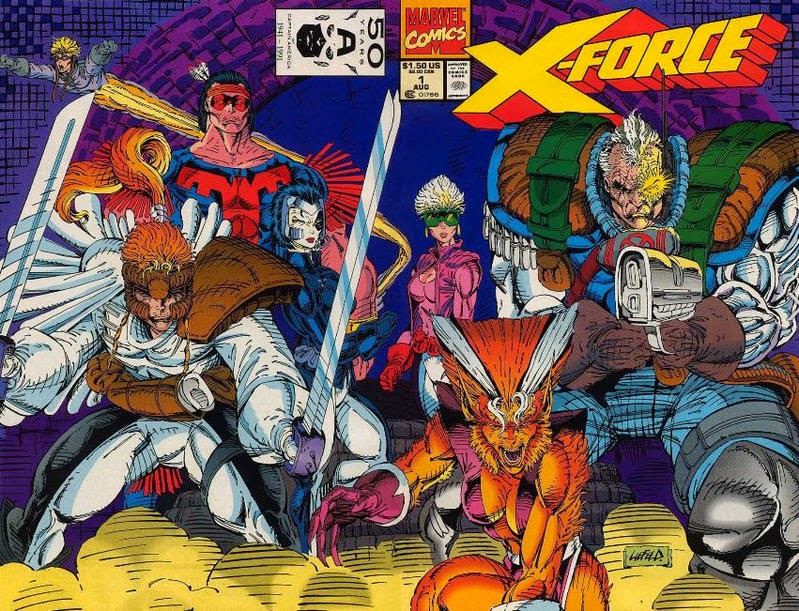 Merry Christmas! I hope everyone is having a nice holiday season!

Once again, I’ll be doing a special theme for the 12 Days of X-Mas as I look at an older X-Men comic, series or theme. Over the years, I’ve changed from a more general “X-Men” theme to looking at a specific series. This year, we’re looking at volume 1 of everyone’s favorite 90’s creation: X-Force! Launching in 1991, this is going to be interesting. I haven’t read these issues since early high school!

A lot of people say a lot of things about Rob Liefeld, but I have to say, I’ve always enjoyed his work. The pencils aren’t the most realistic, but that sense of dynamic action on every page really pops. One thing that really struck me as I re-read this issue was the panel layout of each page. Liefeld never goes for a straight grid. Each page is unique, with smaller insets, partial splashes, and odd patterns and colors set behind the panels. In some cases, I had a hard time figuring out what order to read the panels, but for most pages, I found myself pleasantly engaged by the non-standard layout. Some of the background patterns even reminded me of Snake Eye’s Arashikage tattoo!

Fabian Nicieza provides the dialogue, and one thing absolutely blew me away. There is almost no narration in this issue. The story is told through dialogue, either yelled or spoken. We don’t have the yellow boxes of modern comics to tell us what is happening. That’s an even more impressive factor considering how much is introduced in this debut issue. We meet the X-Force team itself, their main target Stryfe, and his team of mutants the MLF. We see X-Force’s new HQ established. And simmering subplots are introduced with SHIELD’s G.W. Bridge.

In our debut issue, the core team is fairly straightforward. Most of the characterization is focused on Cable. There are elements of his past that I do not remember AT ALL. I forgot he kept his powers hidden from the team when this series started. I had totally forgotten that he had a father-son relationship with some dude named Tyler. I think Cable and Domino are still together in this too, but I’m pretty sure that gets retconned at some point soon.

As for the rest of the team, Domino is Cable’s girlfriend. Cannonball is the earnest young soldier seeking Cable’s approval. Shatterstar and Feral are both wildcard brawlers. Warpath is almost totally silent, although Cable does allude to the fact that Warpath’s strength seems to be increasing. Plus, I forgot that Sunspot was trapped in narrative limbo with the Externals and that silly guy Gideon. Oh man, I’m dreading that External plotline.

I really love Warpath’s costume. That is such a classic look; I wish the character was appearing in something more regularly. I also can’t resist the design on Shatterstar. That padded facemask, the double blades, the half-cape. Let’s face it, that’s a great 90’s design. Feral is pretty basic, but I LOVE that huge afro. Domino looks better without the weird shell facemask. I think her look here is not flattering. Liefeld really does have a knack for costume design. Cable’s huge vest, guns, shoulder pads couldn’t be more 90’s. I know it is silly, but c’mon, it’s also pretty awesome! I also love Stryfe and the MLF. Boom Boom and Cannonball have the worst costumes in the comic. The choice to go with pink as the primary color for both is a mistake, and the accent colors only make it worse. Oof, Cannonball has looked so much better!

All in all, this issue is an intellectual property bonanza! There are so many ideas and concepts tossed out in the premiere issue that I can’t help but find this comic dang entertaining. I don’t think it is just nostalgia to say this comic is GOOD!
Posted by Timbotron at 8:00 AM